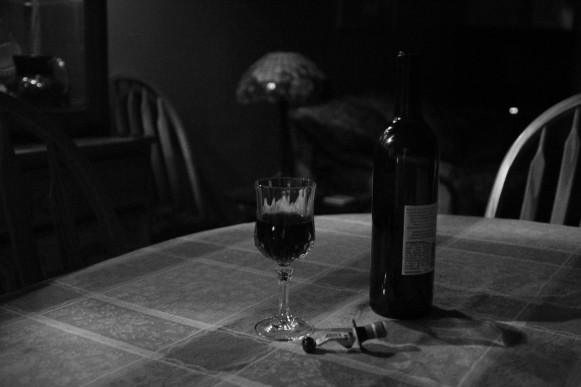 I sit here alone while it’s dark outside.  A strain of unidentified jazz music is playing in my head and I can’t recognize the tune for the life of me.  It’s piano music on a solo piano and almost sounds like a combination of Frank Sinatra, Barry Manilow and Bobby Darin all rolled into one.  Somehow it’s comforting to hear it in my head even though I strain to listen to it play correctly.  I’m sure that I’ve heard it before only I just can’t recall it off hand.

It’s been a long day complicated by a notorious explosion of people running to me to get some things reviewed and signed off.  It will all be squared away by the end of the week one way or another.  But for now what they want isn’t my highest priority in life.  Somehow I’ve grown distant from them and the drama that constantly surrounds that office.  I don’t need that level of stress and I’m pretty well shutting it and them out of my life so far.

Concerns about driving in to st. Paul twice a week are no longer concerns.  Management is afraid that I’ll end up doing some version of a break dance as performed by a 59 year old man on the ice and ending up reinjuring my hip and my arm.  So they’ve threw out the option to work at home full time through February 19th.  Momma didn’t raise no fool.  I filled out the paperwork and submitted straight away before they could withdraw the offer.

I’m still trying to mentally wrap my head around the idea that I really do have to get up and actually do actual money earning work once again.  It’s a foreign concept after these past what?  Six to eight weeks of being home and away from all of that?  I can’t remember for sure and maybe it doesn’t really matter when it comes right down to it.

So at the end of the day  (and it is the end of my day), we’ll sign off with some jazz still playing in my head and Big Boy crying that he’s starving to death.  That’s the only stress and drama that I really need in my life.  The rest is nothing but a thing and will only be distant memories six hours after I actually do retire.  Why worry over something and crap that doesn’t really matter.

Yeh, I know that there may be some typos and grammatical errors.  I can live with them.

Saturday at the Y watching the girls play some round all
A snoozer of a Friday as I wait on my ride to be done
Wouldn’t it be nice to have nothing else to do other than eat and sleep in the sunshine?
Winter is moving so slowly
So looking forward to Spring
I went to see my grands play some round ball today.
Looks are deceiving. It’s-9F (-24C) out there. Perfect weather for polar bears.
It was frosty outside this morning.
February visitor