I’ve walked the length of Japan since last April.  How come I don’t have the refrigerator magnets from there in that case?  I think someone owes me some magnets. 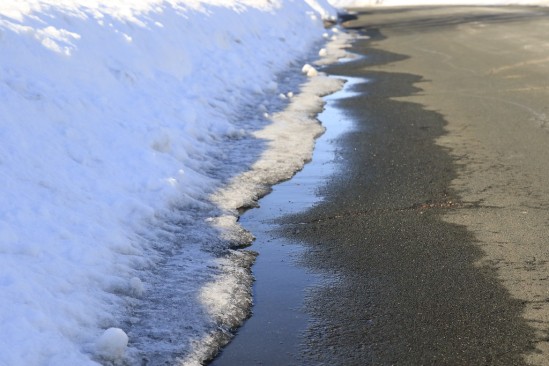 March.  “In like a lion and out like a lamb.”  Or so the saying goes.  It was fine to think it and say it when I was a kid growing up down home but this is central Minnesota.  Who really knows what tomorrow will bring or what will come out of the Arctic, thru Canada Land and finally to us.  Central Minnesota is most definitely not southeastern Iowa.

I remember when I was a kid sitting in Sister Karen’s 4th grade class looking out the window and watching the sun shining and the skies being blue outside.  And then I’d watch as the sun and warm weather melted the snow away.  I would sit there and watch the snow slowly recede off of the convent’s lawn and all the while wondering what snow was left on our sledding run.  That was more important than some dumb ol’ spelling lesson.  We’d rush home after school, grab the snow shovels and run out to the run hoping to at least throw some snow back on the run so we could keep sledding for as long as possible.  That would work for maybe a day or two but then we would just have to give up and watch Mother Nature take over and melt it all away.

March.  We used to joke that it was an Indian word meaning “mud” when I was growing up.  That’s exactly what we had after the snow melted away.  Mud everywhere and it would stay muddy because there was still a frost in the ground keeping the soil from absorbing the water or delaying how fast it would absorb it.  The local farmers hated it because the fields would be too wet so they could get out and get them ready for planting.  Grandma hated it when we boys would joke about what March meant.  It usually meant a whack upside the back of our heads from her and then her calling us “Shanty Irish“.

March.  St. Patrick’s Day month and Momma would be busy putting all of her decorations out to get ready to celebrate the day.  It meant I had to look forward to corned beef and cabbage for dinner that day and I thoroughly detested cabbage.  I wasn’t a great fan of corned beef either but I didn’t get a vote on what she made for dinner.  You ate what she put on your plate or you had to listen to her tell you about all the starving kids in China, how bad things were during the Great Depression and how I should be grateful that I had food to eat.  You learned to eat or how to hide what you didn’t wanna eat.

All I know now is I’m glad that I have another February behind me.  The sun is getting warmer as it climbs higher in the sky each day.  The skies are blue.  The snow and the ice is melting.  I’ll be getting my garden beds ready for a new season just as soon as snow recedes from them.  There are times that I wish that I never grew up.  I’d rather be thinking how many more days I could still be sledding.