And we got some chores done today.  One of which was to go to my oldest daughter’s and SIL’s house and help him pull out the old concrete laundry sink and replace it with a new one.  Damn those things are heavy and I wish it hadn’t failed.  I don’t even know if you can get another one of those things even if you special ordered it.  I’m sure it’s been in the house since it was originally built in the 1950’s.  I’m wondering if some epoxy would reseal it so the tubs wouldn’t leak.  It would make an excellent thing to have for a greenhouse if I could get a blacksmith to weld up a new support frame for it.  I’m sure it wouldn’t be hard to work up a water spigot for it.

And lastly I finished off my trellis for peas in my garden.  They’ll grow and climb like crazy on this.  All I did was get a roll of 48″ wide garden fence that has the 2″X4″ panels, cut it to size and then use some zip ties to secure it.  Too easy.  I still have to cut a couple of the panels just in case I get something growing on the wrong side so I can pick them.  Now that this is almost done,  all I need now is some warm weather so I can keep pushing on with my garden.  We will build another bed next weekend.  Maybe even two given how easy the last one was to put together.

It did feel good to get outside and drink in some sunshine even if it was a bit brisk 6C out there.  No, I didn’t wear a jacket out there.  I decided to push my luck today.  Hopefully I don’t have a relapse from my cold the other week.

It’s the first day of Spring on the frozen tundra.  “The frozen tundra” is what Miss C calls Minnesota.  And it’s true in a sense.  I’ve read on I dunno how many blog posts where Spring has been popping up all over the place and yet it’s been avoiding this place.  And we even woke up to about an inch of that white stuff yesterday morning.  It’s now gone by the way.  Miss Anna and I would definitely love to see steadily warming temps from here on out and I really, really hope our friends to the north in Canada Land get mucher warmer temps.  That guarantees us warmer temps here.

There’s frost everywhere I see when I look out the front window.  But the sun is out and the robins are starting to sing up a storm as I stand at the window with a cup of coffee in hand.  The only thing is you really don’t want to know what the actual temperature is out there.  You wouldn’t think it was finally Spring and neither would I.  So we’ll just ignore what the thermometer says for now. 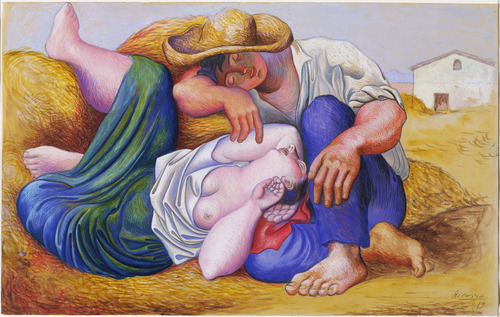 The painting is carefully planned and controlled, and in that sense an Apolline work of art, and makes its share of erudite allusions to the classical tradition: to the Antique (the pedimental sculptures of the Parthenon), the Renaissance (the massive, straining figures of Michelangelo) and modernist classicism (the late Arcadian scenes of Cezanne).

More snow today for central Minnesota
Ok. I’m ready for the contractors tomorrow
Go back to Canada cold weather
It’s “I can’t feel my face cold” out there this morning
7F(-14C) out there. Brrrrrrrr
This is -23C. Brrrrrrrr!