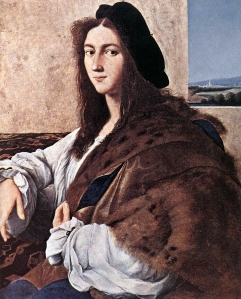 Portrait of a Young Man is a painting in oil on panel, probably from 1513–1514, by the Italian High Renaissance Old Master painter and architect Raffaello Sanzio da Urbino better known simply as Raphel.  The painting was stolen by the Nazis from Poland.  Many historians regard it as the most important painting missing since World War II.

The subject’s identity is unverified, but many scholars have traditionally regarded it as Raphael’s self-portrait.  The facial features are perceived by specialists as compatible with, if not clearly identical to, the only undoubted self-portrait by Raphael in his fresco The  School of Athens at the Vatican, identified as such by Vasari.  If it is a self-portrait, no hint is given of Raphael’s profession; the portrait shows a richly-dressed and “confidently-poised” young man.  If it can be accepted that this painting was indeed created by Raphael as a self-portrait, then he apparently identified particularly with the female gender, just as Da Vinci did in the Mona Lisa.